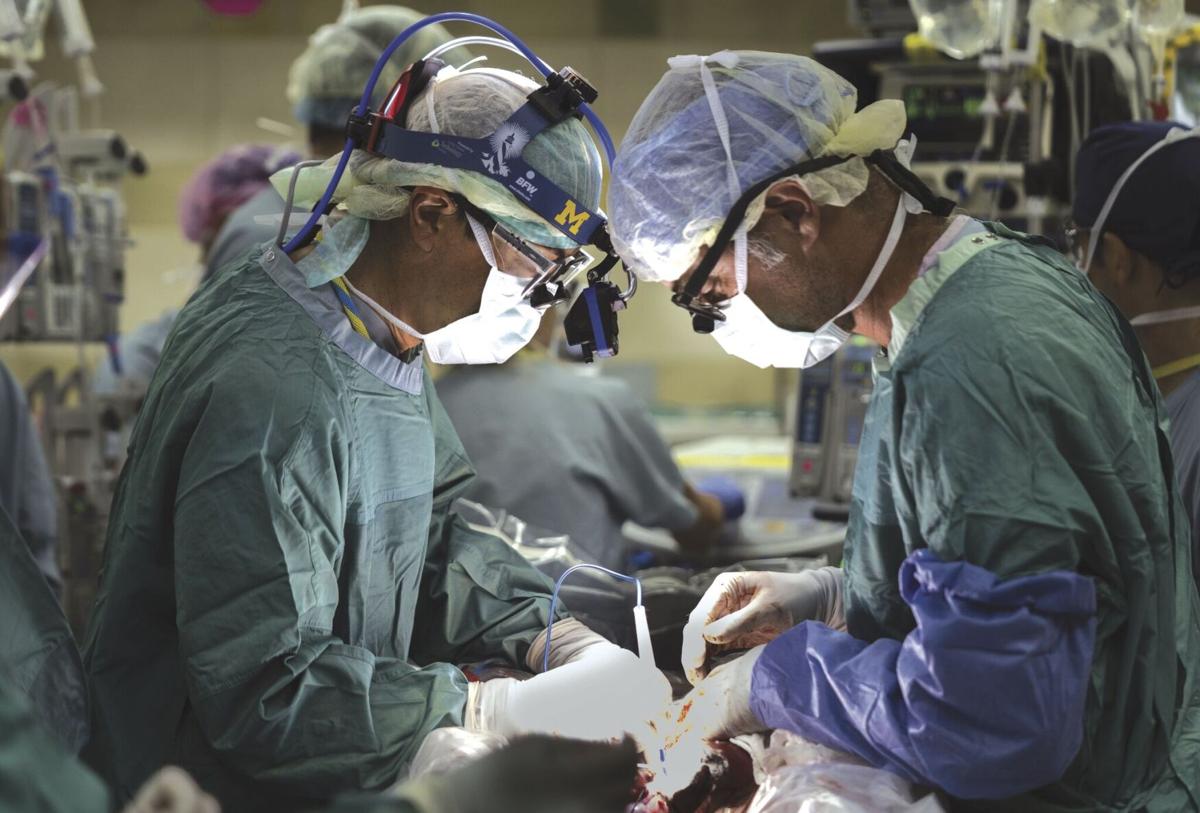 Pediatric and fetal surgeon Dr. Marcus Jarboe (right), one of two former Washington locals to participate in the operation, is pictured in surgery during the landmark surgery to separate conjoined twins Sarahbeth and Amelia Irwin in Michigan. Dr. Jarboe and pediatric plastic surgeon Dr. Christian Vercler both grew up in Washington and are Washington Community High School graduates. Dr. Jarboe graduated from WCHS in 1991, Dr. Vercler in 1993. 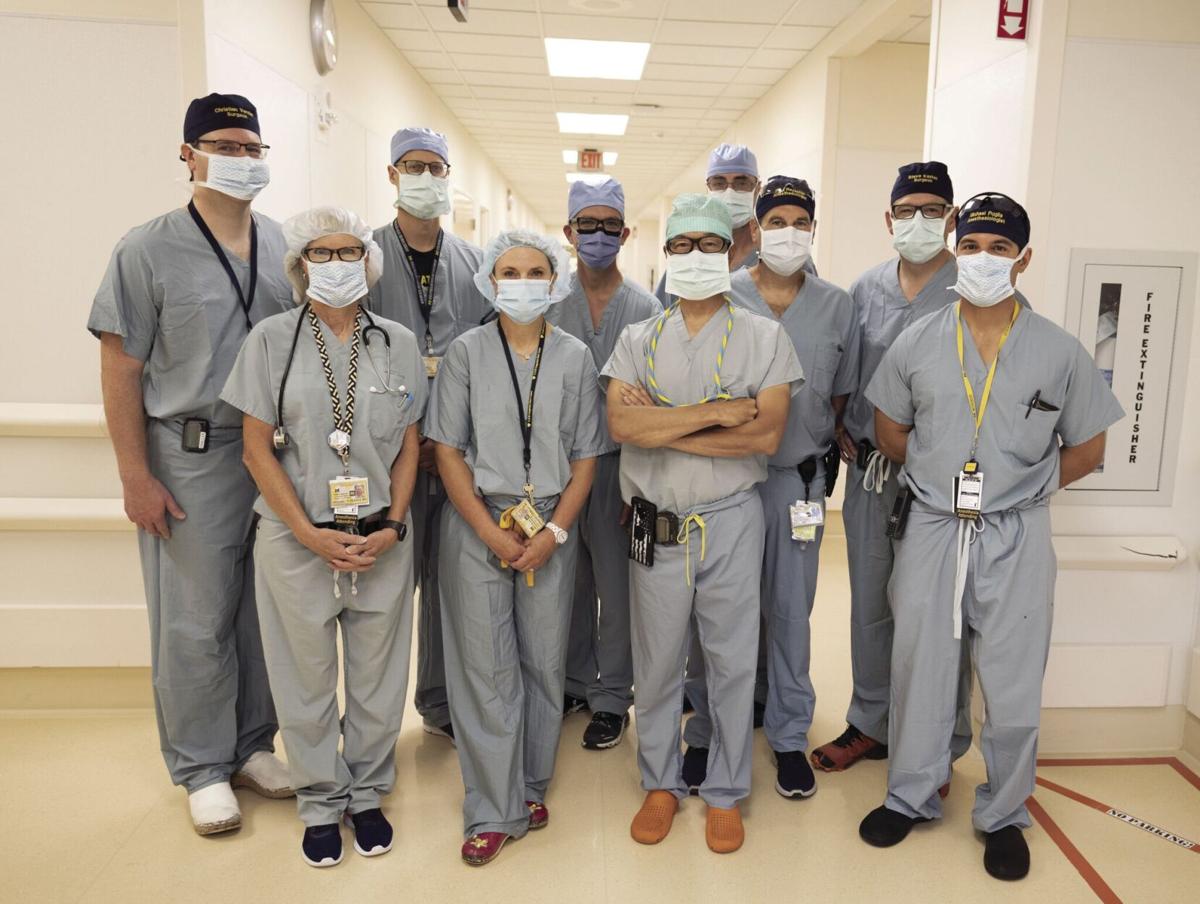 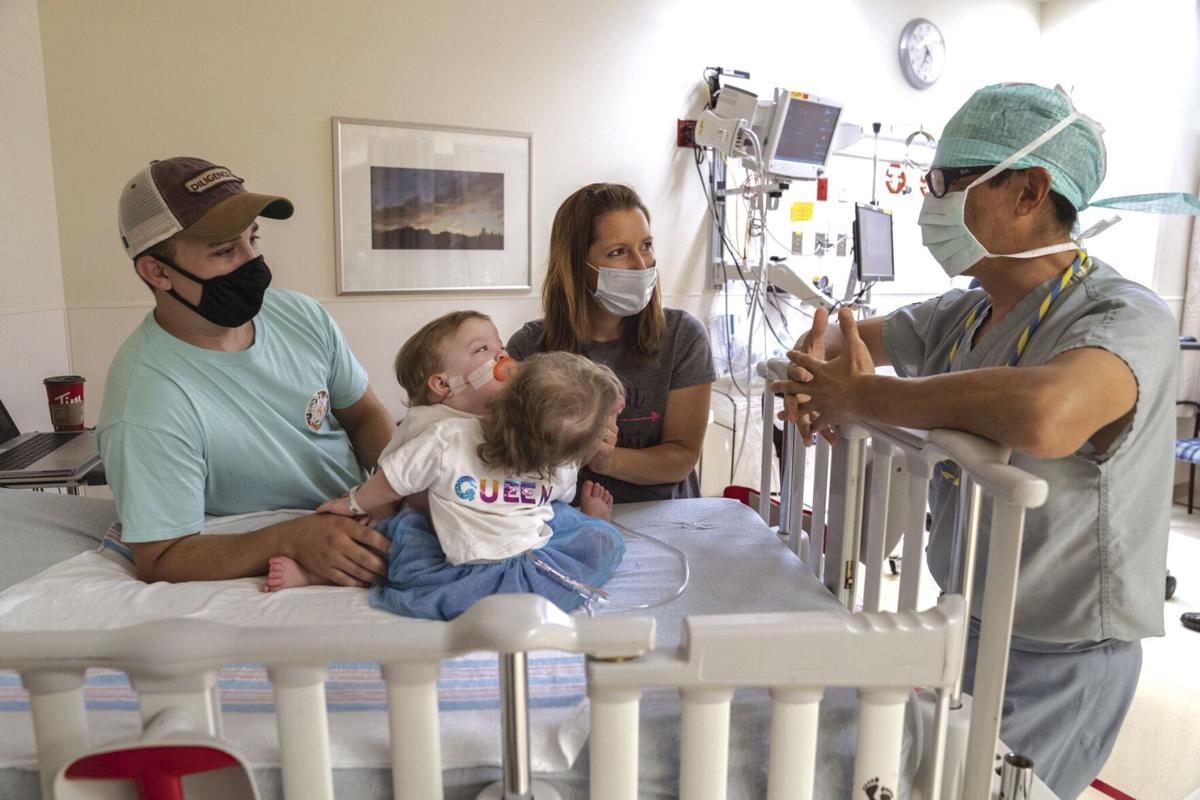 Sarahbeth and Amelia’s parents discuss the specifics of the procedure with one of several specialized surgeons who were to perform in the historical surgery to separate the twins. 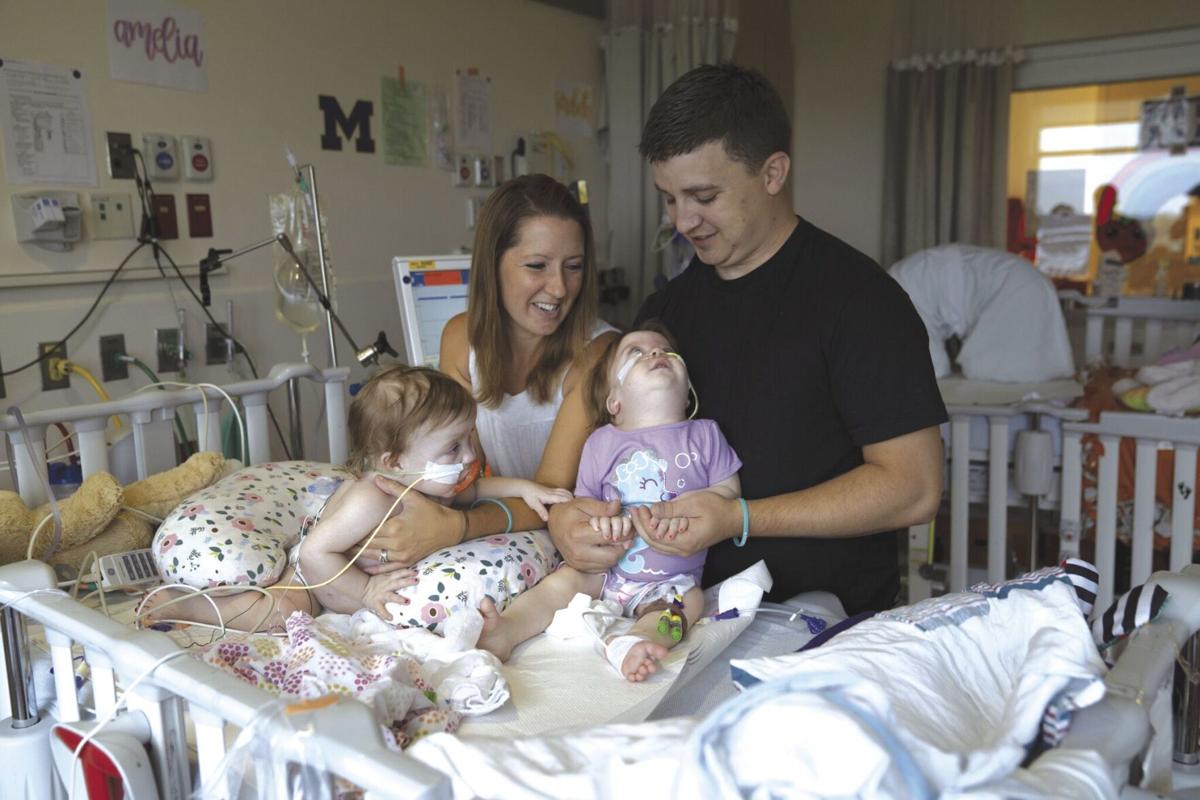 After the 11-hour surgery, the twins thrived and enjoyed time with their parents individually for their very first time.

Pediatric and fetal surgeon Dr. Marcus Jarboe (right), one of two former Washington locals to participate in the operation, is pictured in surgery during the landmark surgery to separate conjoined twins Sarahbeth and Amelia Irwin in Michigan. Dr. Jarboe and pediatric plastic surgeon Dr. Christian Vercler both grew up in Washington and are Washington Community High School graduates. Dr. Jarboe graduated from WCHS in 1991, Dr. Vercler in 1993.

Sarahbeth and Amelia’s parents discuss the specifics of the procedure with one of several specialized surgeons who were to perform in the historical surgery to separate the twins.

After the 11-hour surgery, the twins thrived and enjoyed time with their parents individually for their very first time.

Early in August of 2020, amid the COVID-19 pandemic, a Michigan medical team did something that had never been done before at Ann Arbor’s C.S. Mott Children’s Hospital: the separation of conjoined twin baby girls.

Sarahbeth and Amelia Irwin were born in June of 2019 conjoined at the chest wall. The girls had separate hearts and digestive tracts, but they shared livers.

Surgery to separate the twins was originally set for February of this year, but the girls got sick shortly before, and then Coronavirus hit.  The operation was delayed.

But, on August 5, a team of more than two dozen doctors, nurses and other specialists at Mott came together and successfully separated Sarabeth and Amelia during a procedure that took nearly 11 hours.

It was a story that made national news, and rightfully so.  Conjoined twins are rare, and the tedious and challenging separation operation is just as extraordinary. Four months later, there’s not a doubt the most miraculous part of this story is that the twins are thriving on their own after spending most of their young lives connected.

But, there’s a little-known side-story to this tale that is almost just as amazing.  Among the six surgeons on the team, two of them hail from the same hometown.

Dr. Marcus Jarboe said he never planned on going to medical school. He was thinking about a future in engineering or architecture, instead.  But something happened the summer of his junior year that steered him down a different path.

He and his parents and younger brother Kevin were visiting family on the North Carolina coast. The brothers were playing in the ocean when Kevin was hit by a wave that slammed him hard against the ocean floor.  The impact was enough that it stretched and tore the inner lining of his neck vessels. In short, that stopped blood flow to the brain stem.  Shortly afterwards, 15-year- old Kevin suffered a debilitating stroke.

Fortunately, the family was close to Duke University Medical Center, where doctors there saved his life. It was then Jarboe started thinking about medicine.

“It was really impressive what the doctors could do for both my brother and my parents, and how they helped them through a really hard time,” recalled Dr. Jarboe.

So, after graduation he started his undergrad at the University of Illinois. Five years later, he was at Harvard Medical.

“I didn’t really know what I wanted to be in medical school, except I knew I didn’t want to be a surgeon.  I knew that for sure. That was the only thing I knew for certain,” he chuckled.  “But lo and behold…”

Somewhere down the line, his mind was changed again.

“I grew up out by Pine Lakes, and we had cattle, and Dad and I always worked on our trucks and tractors and cars, and we did a lot of carpentry. I always liked working with my hands.”

He said that he loved the problem-solving aspect of medicine, but he’d miss working with his hands.

“It worked out pretty good, because in surgery you get to work with your hands, and do the problem solving,” he said. “It’s the best job in the world. I really, really enjoy it; it’s a lot of fun.

It’s funny how you get led to where you are. God works in mysterious ways.”

Turns out, it was his brother Kevin who became the engineer and now works for CAT.  Dr. Jarboe said the stroke affected his right side and he uses a wheelchair a lot of the time, but it has never slowed him down much.

“He graduated from Illinois in electrical engineering. He definitely got the brains out of the two of us, that’s for sure,” his brother said. “He’s pretty smart and really creative.”

Dr. Christian Vercler remembers well Dr. Jarboe’s brother.  They were in the same class at WCHS, and lab partners in biology their freshman year.

Unlike Dr. Jarboe, Dr. Vercler always had a vague sense he was going to go into medicine.  He was inspired by his grandmother, who had started attending medical school in Europe during World War II, but had to quit after schools closed. She eventually made her way to the States where she became a farmer’s wife.  But Dr. Vercler remembers the stories she’d tell about med school, and he would look at her old textbooks.

After graduation, he enrolled at the University of Illinois College of Medicine at Peoria.  At the time, he pictured himself someday becoming a family practitioner in his hometown of Washington.

Over time, though, he found himself more interested in pediatric surgery.  At first, he loved the idea, but during his surgical training at Emory, he decided he would rather go into plastic surgery. The idea of reconstructing a body intrigued him. He went onto Harvard and Boston Children’s Hospital, where he ultimately decided pediatric plastic surgery was his calling; he wanted to help put kids back together. He, too, went through a fellowship at the University of Michigan and ended up staying.

“At every turn I had some mentor that kind of guided me toward a certain path,” he remembered. “Which definitely, now that I'm here doing this stuff, it seems like it was the right path all along.”

He couldn’t resist razzing his colleague a bit.

“So, it was interesting. My journey was one where I wanted to be like Marcus, but realized that it’s way cooler to do what I do now,” he laughed.

“But to think that Marcus and I are both doing surgery, both here at the University of Michigan, and we both get to operate on this major, high-profile case...I think it’s cool.”

It was a high-profile case that incredibly both Drs. Jarboe and Vercler said was relatively easy.

Working with lead surgeons Dr. George Mychaliska, Dr. Steven Kasten and Dr. Richard Ohye, the team had gone through many months of planning, preparing and rehearsing.

“We do a lot of the rare of the rare, but this is the first time we did this,” said Dr. Jarboe.  “You’re operating on two kids in one operating room. That’s something you never do in the United States. That’s a big deal.”

The team had a lot of aspects to consider. Multiple simulations and many hours were spent going through the surgery beforehand.  Life-like 3D printed models of the girls’ livers and body structure helped surgeons plan for every step.

Everyone played a very unique and important part.  Months before the surgery, plastic surgeons Drs. Kasten and Vercler placed tissue expanders under the skin, which, in layman’s terms, are medical grade water balloons which were slowly filled with saline.  This caused the twin’s skin to stretch, and in time provided extra skin to reconstruct the girls after they were separated.

The plastic surgeons made the initial incision, the two cardiac surgeons separated the chest structures, and pediatric surgeons Drs. Mychaliska and Jarboe divided the liver. An intravenous fluorescent dye was used which outlined where one liver started and the other ended. This helped the surgeons make a precise and safe separation.

Dr. Vercler said there was really nothing left to chance.

“When we were actually performing it, it was like we were showing up for the recital and playing the piece that we worked on for six months for our piano teacher. It couldn’t have gone more smoothly.”

Teamwork and camaraderie played a huge part, too.  Dr. Jarboe said it was the best team in the hospital, bringing with it a fun atmosphere which made 11 hours go by fairly quickly.

“It was a lot of fun,” said Jarboe.  “When everyone has the same goal, chances of things going well is pretty dang good.”

Jarboe quipped that it all sounds a lot fancier than it really is.

“You get used to it,” he said, “It’s just plumbing and some cutting and sewing.”

Yet, after 20 years and some 10,000 surgeries, there are some things that never cease to amaze him.

“Seeing a heart beating in the O.R. is pretty cool, I gotta tell ya, even after 20 years.  But, to see two beating next to each other...that was crazy. You never see that.”

Equally as awesome was seeing the twins at a follow-up visit weeks after the surgery.

Sometime after the surgery, Dr. Vercler reflected on the man who helped him get into medical school.  The late Charles Everett Koop was the Surgeon General under President Ronald Reagan.  He was also the first pediatric surgeon at the Children’s Hospital of Philadelphia, and was famously known for separating conjoined twins.

During Vercler’s years as an undergrad, he came to know Dr. Koop, and it was Dr. Koop who wrote a letter of recommendation which helped Vercler get into medical school.

“He passed away several years ago, but I’d love to be able to say, ‘Hey Dr. Koop, look what I did.  Thanks for writing that letter of recommendation!’.”

So, that’s the story of how two farm kids from Washington ended up in another state, but at the same hospital, on the same day, operating side-by-side in a surgery so rare it’s believed to be the first in Michigan’s history.

On that day, Dr. Vercler joked to Dr. Jarboe that they should take a picture in their surgical gear and send it back to their hometown.  In the end, they never got a chance to take that picture.

“We had bigger fish to fry on that day,” said Dr. Vercler.

Both Dr. Jarboe’s and Dr. Vercler’s families still reside in Washington, a place they are proud to call their hometown.

“People here at the University of Michigan will say, ‘Hey, I heard you and Marcus went to high school together,’ and I’ll always say, ‘Oh yeah! Washington, Illinois...it’s a hotbed of surgical excellence’,” declared Dr. Vercler.  “The best minds are coming out of Washington. You better watch out!”

If you’d like to see a video of this unique and remarkable surgery at Mott Children’s Hospital, you can watch it at https://www.youtube.com/watch?v=fPw0vdblqxA.