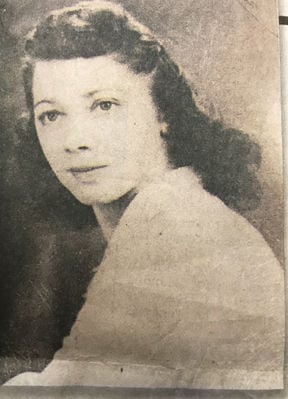 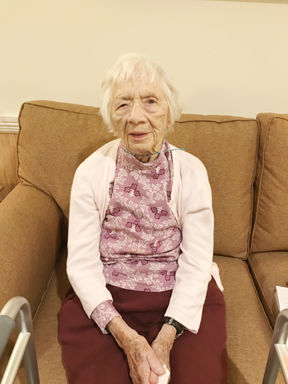 Centenarian Annette Dyar-Sherman, a resident of Morningside of Washington talks about her life, her milestone birthday and her role in World War II.

Centenarian Annette Dyar-Sherman, a resident of Morningside of Washington talks about her life, her milestone birthday and her role in World War II.

On the first floor of Morningside of Washington, beyond the lobby, there is a wall dedicated to veterans--pictures of those who served their country and who now make their home at the assisted living facility.  There is one lady among them.  Her name is Annette Dyar Sherman.

Annette is kind of a big deal at Morningside, having just celebrated her 100 birthday last month.

She was born on October 23, 1919 to Grace and Wilmer Dyar.  She grew up just a few miles down the road in Eureka, one of six children.  Today, she is the only surviving sibling.

After 100 years, Annette admitted that her memory has grown weak, but she said she’s quite thrilled to have made it this long.

“Physically I don’t like it...but mentally, it’s very interesting to know that I’ve gone through all those stages.  It was me, no one else,” she said matter-of-factly.

Perhaps one of the most interesting stages of Annette’s life was back in the 40’s, when she was a code girl during World War II.  Annette had already earned a degree in English from Eureka College and her Master's in Library Science from the University of Illinois.  Soon after that, she learned her older brother, a bombardier in the United States Air Force, was shot down over the English Channel.

Annette remembers visiting the Eureka College campus when a sign caught her eye. It was a call from the military for young American women to help in the war effort.  More specifically, the military was looking for women who had liberal arts backgrounds or those who were very precise, and may have had a knack for cracking codes.

Like many young Americans, Annette felt called to military service after the bombing of Pearl Harbor. She tried to join the Women’s Army Corp (WAC) and then WAVES, (the Navy’s Women Accepted for Volunteer Emergency Service) but a hearing problem in one of her ears kept her out.  When she saw the sign on the Eureka College campus, she inquired about it. Her background fit the bill. Shortly after, Annette was on her way to Washington D.C. to begin cryptologic training.

Eventually, she became an employee at Arlington Hall Station. She doesn’t talk much about this time--not because she can’t remember--but because it was a top secret detail.  If anyone asked what her job was, she was simply supposed to say she was a secretary.

To this day, she keeps the letter from the Army Security Agency Headquarters sent to her after the war had ended that states: “Information which you were instructed not to reveal to unauthorized persons while you were employed at Arlington Hall should not now, or at any future time, be revealed.”

Recently, more has come to light about that time in history.  In 2017, author Liza Mundy wrote a book called “Code Girls: The Untold Story of the American Women Code Breakers of World War II.”

Annette wasn’t interviewed for the book, and she still keeps a tight lip about that time in her life.  All she said was that she helped crack codes, but not a peep to what those codes translated.  She simply stated she just wanted to help end and win the war. Code breakers played an instrumental part in doing just that.

In 1946, after her duty ended, Annette was offered a position at The New York Public Library.  It was there she met librarian William Elliott, and a year later, the two married and eventually became parents to three children:  two daughters and a son.  She raised them all in Manhattan and other areas of New York State.

Some years later, the family moved to Miami, Florida, where Annette took a job as a children’s librarian.  She and William divorced after 25 years of marriage, and she later married a man by the name of Forman Sherman, who has since passed away.

After she retired, she made her way to the Atlanta, Georgia area to be closer to grandchildren. Illinois, and her hometown of Eureka, however, was calling her home.

Annette moved back and was active in social clubs and church groups until 2015.  She sang alto in church choral groups, and she still enjoys singing at Morningside. Annette said the secret to her longevity is taking walks, which she does daily.

Morningside rolled out the red carpet for Annette last month on her 100th birthday celebration. She even got a picture with Mayor Manier.

“They treated me like royalty, which I am not at all,” she said.

Annette has five grandchildren and one great-grandchild. Her daughter Cathy lives in the Chicago area, and her son John resides in Washington, D.C., but her oldest, Susan, now lives in Eureka.  Annette is grateful for her help, and even so much as said their mother-daughter roles have reversed.

Though Annette is proud of her service to her country, and that she’s now recognized as a non-combat WWII veteran, when asked to look back and recall a favorite time of her life, it wasn’t that time which came to mind.  Instead she smiled and answered, “When I had young children.  My two girls and my son...that was very nice.”